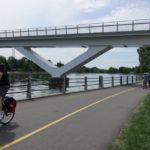 Pedestrians and cyclists in Ottawa should have another option for crossing the Rideau Canal by Canada Day.

The Rideau Canal Crossing project involves the design and construction of a 5 metre wide by 123 metre long, linear multi-use pedestrian and cyclist bridge over the Rideau Canal. It will be in proximity to Fifth Avenue and Clegg Street, from the boulevard west of Queen Elizabeth Driveway (on the west side of the canal) over both the Rideau Canal and Colonel By Drive to the median between Echo Drive and Colonel By Drive (on the east side of the canal). The new bridge will reduce distances between two important mid-town Ottawa communities and will improve access for all users of the City’s extensive network of pedestrian multi-use pathways.

The bridge also includes an elliptically shaped lookout area at the west abutment, structure illumination, and relocation of an existing watermain under the canal.