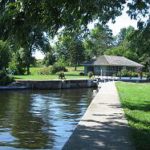 Heading out to Manotick is a popular destination with many local cyclists because it is a town with its own distinct identity that isn’t that far from Ottawa. Depending on your departure point, this ride will be close to 25 kilometres one way, or 50 kilometres for the return trip. This is a nice distance for an afternoon ride.

The town itself is fairly interesting. Manotick’s signature landmark is the old Watson’s Mill, which is located on the banks of the Rideau River opposite Dickinson Square. It is one of the few remaining operating gristmills in Ontario and is open to the public. One block away from Watson’s Mill is Manotick’s main street where you can stop for a relaxing meal at a number of restaurants or pubs.

There are several ways of getting to Manotick, two of which can be done almost entirely on a combination of pathways, bicycle lanes, and paved shoulders (although you will be cycling next to some fairly busy roads in a few areas). These include the Prince of Wales route (when construction work is completed late in 2017) and the Woodroffe route. If you use the Prince of Wales route, you’ll be following the Rideau River, and you’ll pass by several parks that are perfect places for rest stops and to take in the scenery. Both routes are fairly flat, as there are no real hills to speak of.