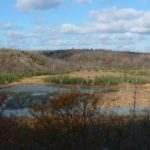 The Nature Conservancy of Canada (NCC) is announcing the protection of 119 hectares (294 acres) of granite ridges, wetlands, streambanks and forests in the Frontenac Arch.

Once the treasured retreat of local landowner John “Jack” Hunter Allum, NCC’s Leland Wetlands, 25 kilometres from Kingston, has been added to NCC’s Loughborough Wilderness, a collection of protected lands at the heart of the Frontenac Arch.

A life-long conservationist, Mr. Allum acquired the property 40 years ago to protect the forest. He spent years expanding that forest, restoring old farm fields by planting 20,000 native trees. After his death, his sons honoured his wishes and sold the property to NCC.

Bell has been working with NCC in the Frontenac Arch for more than 14 years. Since 2005, he has helped NCC and partner organizations acquire more than 3,150 hectares (7,780 acres) of protected land here. The Leland Wetlands is one of the last projects Bell is working on before his retirement at the end of 2019.