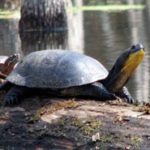 The Nature Conservancy of Canada (NCC) is announcing the protection of a 31-hectare (78-acre) forest and wetland property in the municipality of Bristol, Quebec.

Located 60 kilometres west of Gatineau, the site is part of the Greater Bristol Marsh Area, where NCC already protects more than 1,100 hectares (2,718 acres). This land purchase was made possible thanks to the landowner and financial support from the Governments of Quebec, Canada and the United States, as well as the private sector.

Many biologists consider this region, with its abundant biodiversity, to be one of the most important natural areas in the province. The Ottawa Valley region, which includes the Greater Bristol Marsh Area, is filled with exceptional forests and wetlands.

The region is home to many species listed under Canada’s Species at Risk Act (SARA) and/or the Quebec Act Respecting Threatened or Vulnerable Species (ARTVS).

They include the largest populations of Blanding’s turtle, eastern musk turtle, eastern ribbonsnake and butterfly weed in Quebec. Also a haven for winged wildlife, 13 priority species under the North American Bird Conservation Initiative have been observed in this region.

Great blue heron and mallard also make their home there. The property’s mature forests provide resting and nesting areas for several species of climbing birds such as those of the Picidae family, to which woodpeckers belong.