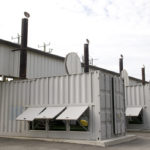 Clean, green, renewable energy, at that. At the City of Ottawa landfill site in Richmond, decomposed waste creates methane – a greenhouse gas that is 20 times more potent than carbon dioxide – that is collected and converted into enough electricity to power about 6,000 homes per year.

The plant reduces annual greenhouse gas emissions by preventing landfill gas from being released into the atmosphere. By collecting the gas through wells inserted into garbage mounds, the facility uses it to power five internal combustion reciprocating engines, each linked to a 1 MW generator.

It’s a process we’ve been doing now for a decade. Since 2007, the Trail Road landfill gas-to-energy facility has converted the equivalent of 1.6 million tonnes of carbon dioxide into renewable energy – that’s like 330,000 passenger vehicles being removed from the road every year!

PowerTrail built another, smaller, plant in Moose Creek in 2013. Using the same technology, this facility produces enough electricity to power 4,000 homes each year and prevents 100,000 tonnes of greenhouse gases from being released into the atmosphere.