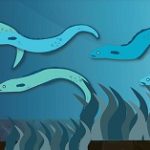 Once the dominant fish species in the Ottawa River, the population of American eels has been decimated. In a span of only 30 years, the population has fallen almost 99% in Ontario. The numbers of eels in Ontario have been reduced so dramatically that they were already considered endangered when the Endangered Species Act came into effect in 2008.

Portage Power has made all efforts to provide safe passage both up and down the Ottawa River at Chaudière Falls, in order to help address the mortality due to hydroelectric facilities. At the new Chaudière Falls Powerhouse, an eel ladder has been installed on the upstream side, allowing the eels to safely bypass the facility. American eels can absorb oxygen through their skin as well as through their gills, allowing them to travel briefly over wet grass or mud. An eel ladder is a series of chutes that zigzag up the dam allowing eels to safely migrate over the powerhouse. This will allow the eels to continue their upstream migration to their traditional habitats. Once the eels have matured and begin their return voyage to the Sargasso Sea, they will once again pass through Chaudière Falls. During the migration season, Portage Power installs a fine spaced rack to ensure they do not enter the generating station. At this point the water is moving slowly enough that the screens do not hurt the eels or other fish, but allow them to maneuver to the bypass channels. Two bypass channels have been installed that will facilitate the eels on their downstream migration. They begin at the top and bottom of the intake channel allowing the eels and other fish to bypass the generating station and continue their migration.